OF THE UNITED STATES 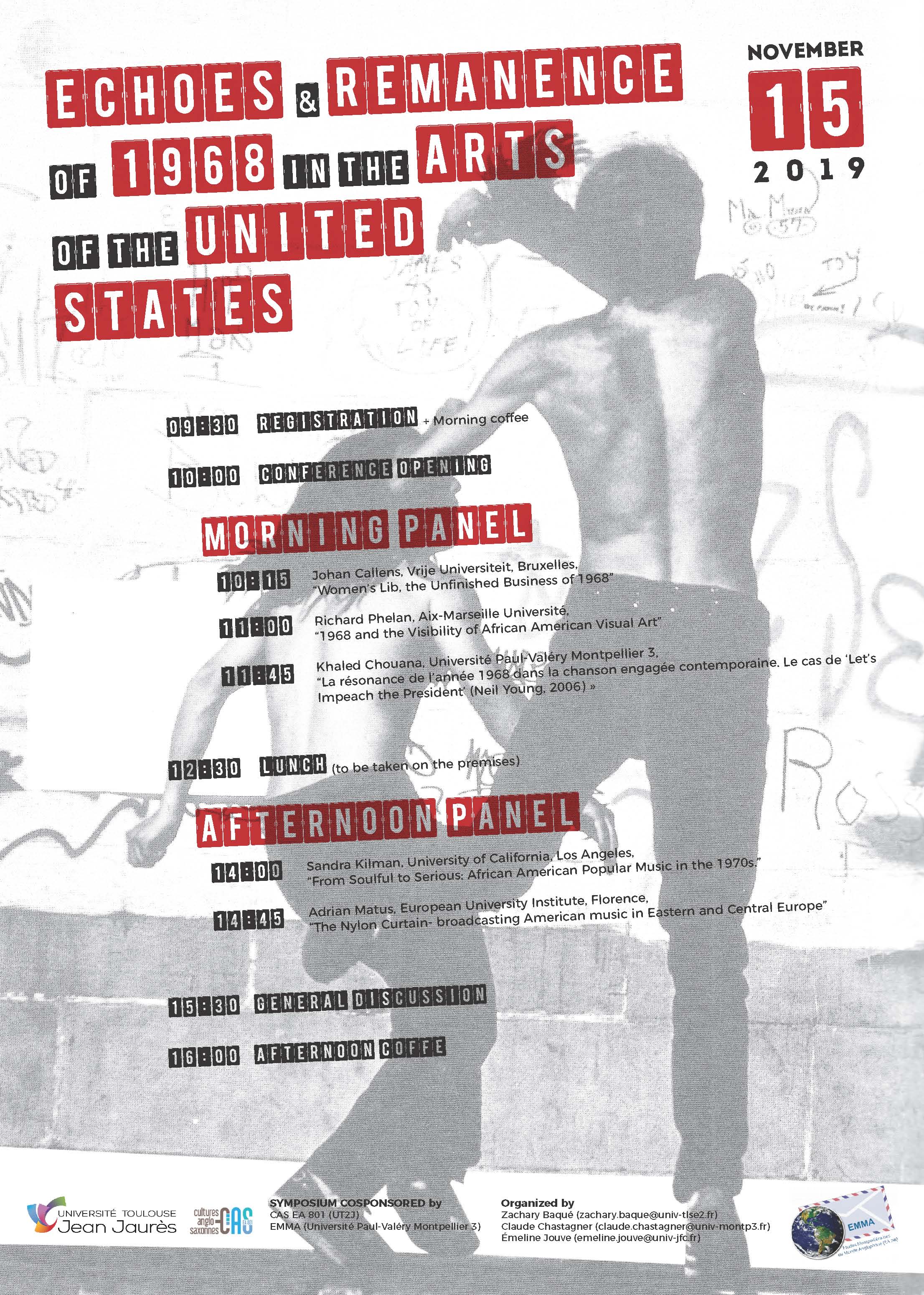 This symposium follows a first one held in Toulouse on November 22, 2018, devoted to the politics of the arts in the United States in 1968. This second day considers the artistic and cultural impact of this particular year.

The first edition highlighted, through presentations on film, theater, drawing, literature, poetry, and popular music, the specificity of artistic creation in the United States in 1968 and established some of its characteristics (political commitment, especially alongside African-Americans, formal experimentation, a focus on the social environment, emergence of new issues), while drawing attention to its ambivalence and ambiguities.

This second day aims at extending the reflection to the post-1968 period. Can the characteristics revealed for the year 1968 be found again later, amplified or transformed? Did they have a lasting impact on artistic production? Were art policies altered? What became of formal questioning, of the attempts to decompartmentalize practices, of the various forms of political and social commitment? Did they have a lasting impact on the country’s artistic practices and policies? Would they be observable even in contemporary forms? Could we then subscribe to Catherine Itzin’s analysis in which 1968 dramatically marks the end of a period and the dawn of a new era?

To what extent were these experiments, on the contrary, only the product of a moment, of short-lived experiences? Should we think, like Alan Wald, that “wanting to find a particular year when these movements would have been at the peak of their power [...] makes it impossible to understand their specificity and their interaction”? That, in the end, the evolution of artistic policies and practices since the sixties is only a gradual process, not a revolution?

Such are the questions that are posed: the specific issue of the formal, theoretical or thematic remanence of practices and experimentation whose origin could be set at a specific moment versus the more complex one of the very possibility of filiation and transmission, of the modalities that such processes could take, and of the role of institutions (the media, education, politics, and religion, etc.) in the transmission of practices and the implementation of artistic policies.

Depending on what one believes they made of the cultural heritage of 1968, the following decades can be organized in different periods: dilution in mainstream commercial culture or return to the old order (the theory of the “backslash”) in the immediate after-1968, a timid rehabilitation in the nineties, before the dismissal triggered by the new millennium that seem only partly compensated by the aseptic borrowings or commemorations of the current decade.

If there has been an impact, the opinions as to its value are subject to very different assessments. In Allan Bloom’s view, the legacy of 1968 boils down to a destructive and nihilistic counterculture based on drug use and sexual experimentation. Daniel Bell, though much more nuanced in his judgment, nevertheless believes that the counterculture culminating in 1968 was totally devoid of originality and merely recycled the avant-gardes of the early twentieth century. This is evidenced by the questioning at various earlier periods, in the name of hedonism and individualism, of the bourgeois cultural order and the principles of frugality and deferred gratification. The counterculture of the late sixties, in his eyes, produced “no aesthetic revolution worthy of the name” merely ushering in an unconvincing form of modernism characterized by the pursuit of pleasure and the satisfaction of instincts. Beyond these conservatives, former activists of the movement turned neo-conservatives, like Peter Collier or David Horowitz, criticize the megalomania of the radical theorists of the late 1960s and blame their failure on the rise of identity politics; Conservative academics like John Harmon McElroy, lambast 1968 was the apex of a form of anti-Americanism, a rejection of the capitalist and Christian roots of American culture, claiming that the culture wars were fought, and that contrary to the disillusioned and pessimistic positions of former activists, the counter-culture won. On abortion, gay rights, identity politics, and on affirmative action, the legacy of 1968 is undeniable. McElroy contends that “political correctness” was the means used to impose these upheavals, through the “intimidation” of American society with accusations of racism, sexism, and harassment of all kinds.

Yet it is paradoxically the Left that most seriously doubts the results of the decade and the impact of its most momentous year, 1968. From Todd Gitlin (former President of the Students for a Democratic Society) to Maurice Isserman, many express a disappointment, and even bitterness, towards the radicalism that emerged at the end of the decade, on which they blame the failure of the movement. Yet, if the New Left has gradually disappeared, activists and cultural experimentalists have obtained or imposed a significant proportion of what they asked for (with varying degrees of success); the artistic explorations themselves stretched over the next decades.

But even if one subscribes to the analysis that makes 1968 a year that marked the subsequent artistic policies in a lasting and positive way, what becomes of experimental art when it becomes commonplace, when the general public and the market place co-opt them, when it is no longer supported by protest movements? Can one observe a correlation, in terms of themes or practices, between the disillusionment, the pessimism and the despair of post-68 artists and the artistic production of the decades that followed? How can one explain the persistence of an interest, including among Millenials, for the most radical forms put forward in 1968? Can this interest be dismissed as a fad, as the result of media or commercial strategies, and of the baby boomers’ impact world in the decision-making process as they rose to positions of power (in politics as well as in the art world) in the last decades?

The papers will focus on two main areas:

1.The impact of the year 1968 (in terms of influence, borrowing, détournement, aggiornamento, etc.) on the cultural policies and practices of the following decades. Examples include Stanley Kubrick’s 2001: A Space Odyssey, which sparked a wave of sci-fi-influenced auteur movies, the Broadway debut of the musical Hair, a seminal moment in terms of the representation of sexuality and ethnicity, or the creation of Apple Records, highlighting the determination of artists to gain control of their careers.

2.The contemporary representation and reinterpretation of the events of 1968: see, for example, the current exhibition on the death of Robert Kennedy which includes, among others, June 7, 1968; the documentary series produced by Netflix in 2018, Robert Kennedy for President; songs such as 1960 What? by Gregory Porter (2010); or Philip Roth’s novel American Pastoral (1998).

The politics of the arts after 1968 can be explored along various lines, in particular:

-its relationship with social protest movements

-the emergence of new theoretical approaches

-the reactions of the institutions and of the political class

-the role of private and public cultural policies and institutions

-the evolution of commercial artistic strategies

Papers may consist of case studies or more global analyses. Transdisciplinary and transnational approaches are welcome.

They will be limited to 400 words, and include a short bio.